ROMNEY LIES ABOUT OBAMA'S CONTRIBUTION TO THE DEBT

Romney the Liar has claimed, repeatedly, that President Obama has increased the national debt "more than all other president combined". (!) This insulting lie is also easy to shoot down. The evidence presented here is conclusive: the huge burden of debt we are laboring under is the DIRECT result of excessive tax cuts for Mittens and his cronies and the fall of revenues brought about by the Great Recession, a recession that is DIRECTLY the fault of predators and thieves like Mitt Romney. Oh, and the president who DID rack up almost as much debt as all other presidents combined? It was George W. Bush. Here is the truth of the matter--something you won't hear from Mittens the Sociopath: 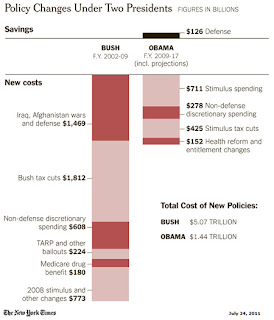 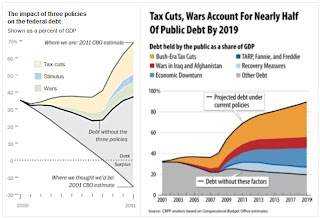 (Click to enlarge these images.) The national debt is a little over $15 trillion. It stood at almost $12 trillion as of 30 September 2009, the end of Bush's last budget. Romney's statement that Obama has increased the debt more than all other presidents put together is not simply a lie.