ROMNEY LIES ABOUT NOT GIVING THE RICH NEW TAX CUTS


"See? I'm not proposing any tax cuts for myself and my rich friends." 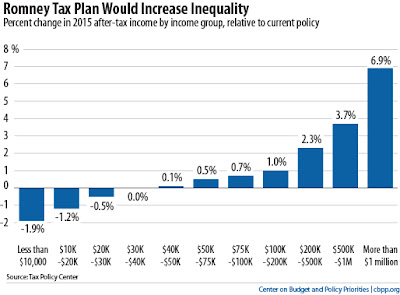 And here is an analysis from the Urban Institute and Brookings Institution:

But Romney doesn’t stop there. He’d make capital gains, dividends, and interest income tax-free for those making less than $200,000 and repeal the estate tax (though he’d retain the gift tax).

He’d cut the corporate rate from 35 percent to 25 percent, make the research and experimentation tax credit permanent, and temporarily allow firms to continue to write-off the full cost of capital investment as soon as they acquire the property. Multinationals would get a temporary tax holiday for overseas profits they bring back to the U.S.

Compared to current law, about 44 percent of those making between $10,000 and $20,000 would get a tax cut that would average about $274. No one in that income group would pay more, but more than half would see no change in their tax bill.

But much of the largess goes to those with the highest-incomes. Households making more than $1 million would get an average tax cut of almost $300,000, largely because, as owners of capital, they’d receive the bulk of the benefit of Romney’s very generous corporate tax reductions. While those making $1 million-plus pay about 20 percent of all federal taxes, they’d receive more than 28 percent of Romney’s tax cuts.

The story is a bit different if you start by assuming the Bush/Obama tax cuts are made permanent.

Compared to that already-generous law, the average tax cut for all households shrinks from $3,500 to about $1,000 and a sizable number of low-income families would see their taxes go up.

For instance, about 15 percent of those in the $10,000 to $20,000 income group would get an average tax cut of about $140, but 20 percent would get hit with an average tax increase of $1,000, mostly because Romney would bring back the less generous versions of those refundable child and earned income credits.

Did you see what Willard is proposing?? He's going to SCREW poor people by reducing tax code provisions that benefit them, while he proposes to dump money on himself and his rich friends. The kicker?

Almost everyone who makes more than $1 million would get a tax cut averaging roughly $150,000. As a group, they’d receive nearly half the benefit of Romney’s tax plan.