Amazingly, Romney the Liar has been traveling the country spreading a lie that is so preposterous, so outrageously insulting, and so laughable that it should IMMEDIATELY disqualify him from consideration for our nation's highest job. Take a look at this piece of unmitigated, lying crap:

"25 million people are out of work because of Barack Obama. And so I'll compare my experience in the private sector where, net-net, we created over 100,000 jobs."


"I'll compare that record with his record, where he has not created any new jobs."

Romney is, in effect, blaming Obama for things that happened BEFORE OBAMA WAS EVEN PRESIDENT. Astonishingly, Romney is blaming the 3.6 million job losses in 2008 on Barack Obama! The Great Recession, which was caused by thieves, grifters, con artists, liars, and predators like Mitt Romney, is the direct cause of the nation's dire job situation. Moreover, Romney is attributing every job lost in the first four months of 2009 to Obama--before Obama's stimulus program could take effect. The statement "25 million people are out of work because of Barack  Obama" rivals Sarah Palin's vicious lie that President Obama's health care law was going let handicapped children die. It is, in fact, one of the most brazen lies ever told in an American political campaign. The truth of the matter--which is 180 degrees away from what Romney is saying--is this:

[From December 2011]: With one month remaining this year, the U.S. private sector has now added 1.67 million jobs in 2011, well ahead of last year’s private-sector total of 1.2 million, and the best year for businesses since 2006. Since March 2010, American businesses have created 2.9 million jobs.


This remarkable graphic bears scrutiny as well. The lines below the 0 level represent job losses in one month, those above represent gains. Red is for Bush, blue for Obama. Click to enlarge it--and see the depth of Romney's lies: 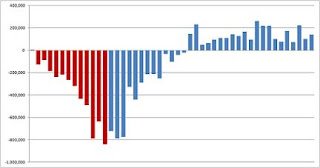 And as for Romney's claim that at Bain Capital he added 100,000 new jobs, The Washington Post had this to say:

Fehrnstrom [subordinate liar working for the Liar-in-Chief] says the 100,000 figure stems from the growth in jobs from three companies that Romney helped to start or grow while at Bain Capital: Staples (a gain of 89,000 jobs), The Sports Authority (15,000 jobs), and Domino’s (7,900 jobs).

This tally obviously does not include job losses from other companies with which Bain Capital was involved — and are based on current employment figures, not the period when Romney worked at Bain. (Indeed, Romney made his comments in response to a former employee of American Pad & Paper Co. who says he lost his job after Bain Capital took it private.)

As we have explored before, we can neither prove nor disprove Romney’s previous statement that “tens of thousands of jobs net-net were created.”

They can neither prove it nor disprove it because they can't get a straight answer from Crooked Willard about the matter.

According to state unemployment numbers, the net number of jobs added during the four years Romney was in office was 24,400 -- a fraction of the total of about 200,000 lost during the recession [of 2001].

Although the number of new jobs steadily climbed during Romney's four years in office -- from a loss of 54,700 in his first year to a gain of 34,700 in his final year -- most of the rest of the country rebounded much faster.

Massachusetts is one of just six states that hasn't added back all the jobs lost during the recession. [Emphasis gleefully added.]

"Our losses were steeper, and our gains have been slower and as an end result we are still nearly 100,000 jobs down," said Dana Ansel, research director for the Massachusetts Institute for a New Commonwealth, a nonpartisan think tank.

D'oh! That's GOTTA hurt, Willard, my man! It's part of the reason you slunk off without running for re-election--you would have been thrown out on your ear.

*Romney is LYING when he says ALL job losses in the recession are Obama's fault.

*Romney is LYING about his record at Bain, "forgetting" to account for all the thousands of people thrown out of work by him and the the other Vulture Capitalists.

*Romney is LYING about his "job creation" skills as attested to by his own record as Massachusetts governor.

As I said, this guy lies as easily as most people breathe.

Posted by Joseph Miller at 9:57 PM