Unbelievable. Despicable. Borderline anti-American. On the night of 20 January 2009, the night Barack Obama had just become president, a group of right-wing Republican saboteurs met to come up with a strategy to destroy Obama and his presidency. Prominent among these saboteurs was PAUL RYAN, whom we fondly refer to as Little Paulie or Lyin' Ryan on this blog. The whole disgusting story is right here. Details:

At the meeting, Rep Kevin McCarthy said, "We've gotta challenge them on every single bill." (My emphasis)

"Show united and unyielding opposition to the president’s economic policies."

So they fought against EVERY proposal the president made--EVEN THINGS THEY HAD SUPPORTED UNDER BUSH!

Supported Bush/Cheney keeping cost of two wars out of the Budget.

Now, here's what they opposed or did under Obama:

[Opposed] Raising the Debt Ceiling which, in-and-of-itself, would cause US Economic turmoil. (BTW, Paul Ryan was more responsible than ANY OTHER MEMBER OF CONGRESS for the downgrade of the U.S.'s credit rating).

- Voted NO on every single piece of Legislation brought to the Floor including:

NO on Al Franken's Anti-Rape Amendment,

NO on Lilly Ledbetter,

NO on Fair Pay Act,

And of course, they voted against the stimulus plan even though they had been granted major concessions and the ACA, where the mandate used was a Republican idea.

Oh, and here's a convenient chart for easy reference: 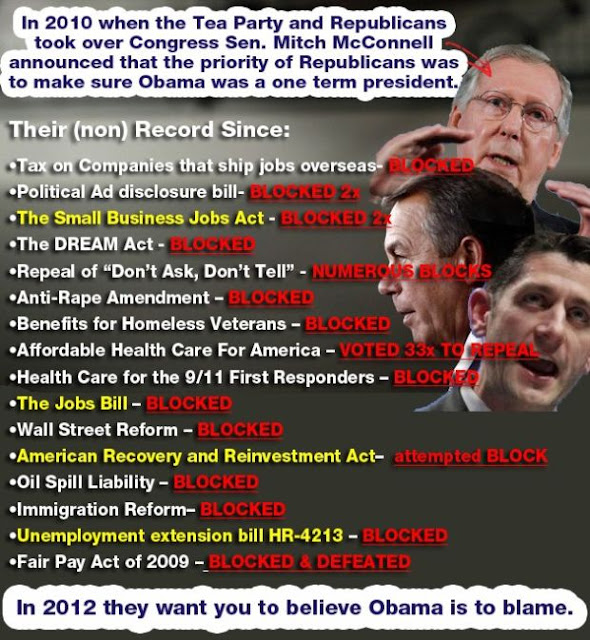 The Republicans EVEN stated publicly that the did NOT want the Federal Reserve to act to stimulate the economy, in effect THREATENING the Fed if it did so.

I'm going to be blunt: Paul Ryan and his cohorts didn't give a DAMN about helping this country out of the economic disaster that had been caused by conservative policies and allowed to happen by a Republican administration. They hated Obama more than they loved America. They had one objective, and one objective ONLY:

And leading the pack was the Republican candidate for Vice President.

You know, the same guy that piously denounced the Obama stimulus.

And then asked for money from it.
Posted by Joseph Miller at 4:10 PM