The blogger Avenging Angel is doing a fantastic job of exposing Willard's non-stop stream of BS, and his work deserves recognition. Here he nails yet another disgusting lie by Mittens: the myth that America is heading to a "hollow military", a lie first uttered by George W. Bush, aka "Commander Codpiece" in reference to the Clinton administration. 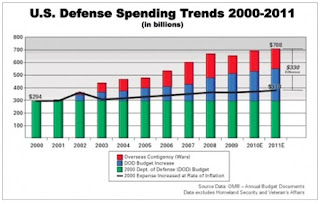 Now the truth of the matter, from Politifact:

"The most extraordinary thing that's happened with this military authorization is the president is planning on cutting $1 trillion out of military spending," [This is a lie in itself, BTW] Romney said. "Our Navy is smaller than it's been since 1917. Our Air Force is smaller and older than any time since 1947. We are cutting our number of troops. We are not giving the veterans the care they deserve. We simply cannot continue to cut our Department of Defense budget if we are going to remain the hope of the Earth. And I will fight to make sure America retains military superiority."


This comment includes a lot of separate claims, but after a number of readers contacted us, we decided to focus on two of them: "Our Navy is smaller than it's been since 1917," and, "Our Air Force is smaller and older than any time since 1947."


His underlying point: The U.S. military has been seriously weakened compared to what it was 50 and 100 years ago.


So Romney has a point. However, even using this metric -- which, as we’ll argue later, is an imperfect one for measuring military strength -- this is not the lowest level since 1916.


How about the Air Force? First, let’s look at the total number of aircraft.


The figures for 2009 show 5,988 total aircraft (4,460 active, 375 reserve and 1,153 in the Air National Guard). That’s a lower number than any year going back at least to 1950, the earliest year tallied in the report. So while we don’t have data going back to 1947, the specific year Romney cited, his claim about the size of the Air Force seems credible.


But what do those numbers mean? Not much, a variety of experts told us.


Counting the number of ships or aircraft is not a good measurement of defense strength because their capabilities have increased dramatically in recent decades. Romney’s comparison "doesn’t pass ‘the giggle test,’ " said William W. Stueck, a historian at the University of Georgia.


Consider what types of naval ships were used in 1916 and 2011. The types of ships active in both years, such as cruisers and destroyers, are outfitted today with far more advanced technology than what was available during World War I. More importantly, the U.S. Navy has 11 aircraft carriers (plus the jets to launch from them), 31 amphibious ships, 14 submarines capable of launching nuclear ballistic missiles and four specialized submarines for launching Cruise missiles -- all categories of vessels that didn't exist in 1916.


As for the Air Force, many U.S. planes may be old, but they "have been modernized with amazing sensors and munitions even when the airframes themselves haven’t been," said Michael O’Hanlon, a scholar at the Brookings Institution. Human factors matter, too. "The vast superiority of the U.S. Air Force has little to do with number of planes, but with vastly superior training, in-flight coordination and control, as well as precision targeting and superior missiles," said Charles Knight, co-director of the Project on Defense Alternatives at the Massachusetts-based Commonwealth Institute.


[Defense experts] Ruehrmund and Bowie write in their report that "although the overall force level is lower, the capabilities of the current force in almost all respects far exceed that of the huge Air Force of the 1950s. Today’s Air Force can maintain surveillance of the planet with space and air-breathing systems; strike with precision any point on the globe within hours; deploy air power and joint forces with unprecedented speed and agility; and provide high-bandwidth secure communications and navigation assistance to the entire joint force."


"The Air Force now buys more unmanned than manned aircraft every year, and that trend is not going to change," said Lance Janda, a historian at Cameron University. "Within our lifetime, I think you’ll see an end to manned combat aircraft, because unmanned planes are more capable and a lot cheaper."

Or as John Pike, director of globalsecurity.org, puts it: "Would anyone care to trade today's Navy or Air Force for either service at any point in the 20th century?"


There’s also another problem with Romney’s claim. He appears to be throwing blame on Obama, which is problematic because military buildups and draw-downs these days take years to run their course. Just look at the long, slow declines in the number of ships and aircraft. These are not turn-on-a-dime events that can be pegged to one president.


...a wide range of experts told us it’s wrong to assume that a decline in the number of ships or aircraft automatically means a weaker military. Quite the contrary: The United States is the world’s unquestioned military leader today, not just because of the number of ships and aircraft in its arsenal but also because each is stocked with top-of-the-line technology and highly trained personnel.


Thanks to the development of everything from nuclear weapons to drones, comparing today’s military to that of 60 to 100 years ago presents an egregious comparison of apples and oranges. Today’s military and political leaders face real challenges in determining the right mix of assets to deal with current and future threats, but Romney’s glib suggestion that today’s military posture is in any way similar to that of its predecessors in 1917 or 1947 is preposterous.


In addition, Romney appears to be using the statistic as a critique of the current administration, while experts tell us that both draw-downs and buildups of military equipment occur over long periods of time and can't be pegged to one president. Put it all together and you have a statement that, despite being close to accurate in its numbers, uses those numbers in service of a ridiculous point. Pants on Fire.

Bush's accusation twelve years ago was a lie. Romney's accusation today is just as much of lie. Romney is promising a gigantic increase in the defense budget, one that is completely unnecessary. Coupled with his latest Millionaire's Tax Cut, it will blow a huge hole in the budget, no matter how savagely Willard screws the poor, the elderly, and kids by destroying the social safety net. No, the real danger to America's security is named Willard Mitt Romney.

You may have heard of him. He's the lying sociopath who has no real qualifications to be president, but would very much like to be anyway.


So much for giving "veterans the care they deserve".
Posted by Joseph Miller at 1:34 AM