You gotta hand it to Willard, folks. When he lies, he lies BIG. Now we are to understand that EVERY job lost by a woman since noon on 20 January 2009 is Barack Obama's fault. The story is here:

Bay Buchanan, a longtime GOP activist and surrogate for the former Massachusetts governor, made the most audacious charge, arguing that the White House had set back women in the workplace several decades.


"One million women have lost their jobs under this administration, nearly one million have become unemployed as a result of Obama's policies," Buchanan declared. "That is 92 percent of the jobs lost while Barack Obama has been president. ... This is frightening, because you know these women are often single women, they are taking care of themselves, they are trying to do their best to do that. ... And many of them are single women who are solely responsible for caring for those kids. And to have this kind of unsettling in the work place is an outrage. It is clear his policies have failed women miserably. It has set women in the workplace back 20 years and we certainly can't afford it. Nor can the children of these women."

All of the usual right-wing propaganda monkeys are flinging this particular feces, and Romney the Liar himself plans to make this a major line of attack. Just one problem, though:

It would be rude of me to point out, I suppose, that the RomneyBots are blaming Barack Obama for not immediately stopping the bleeding CAUSED BY RIGHT-WING ECONOMIC POLICIES from 2001 to 2009. It was these conservative policies that CAUSED the economic meltdown. In 2001, the Republicans inherited a peaceful and prosperous country that was on its way to paying down its debts. Eight years later, they had put our country on its death bed. The FACT of the matter is this: women have been seriously hurt by reductions of jobs in the public sector, reductions mostly driven by Republican governors. Oh, and about those one million jobs supposedly punted away by Obama? From the same article as above:


In other words, virtually all the major women's job losses under Obama happened in the first three months of his administration, BEFORE anything he was doing had had time to have any effect. The RomneyBots are blaming Obama for something that was manifestly not his fault.


Oh, and here's something to think about right here:


Since the recovery from the Great Recession officially began in June 2009, private-sector jobs are up by 2.8 million, [Emphasis added] but public-sector jobs (the combined employment in federal, state, and local governments) are down by 584,000. The figure below compares trends in public-sector employment in the last four recoveries. The current recovery is the only one that has seen public-sector losses over its first 31 months.


If public-sector employment had grown since June 2009 by the average amount it grew in the three previous recoveries (2.8 percent) instead of shrinking by 2.5 percent, there would be 1.2 million more public-sector jobs in the U.S. economy today. In addition, these extra public-sector jobs would have helped preserve about 500,000 private-sector jobs.


And to see it in graphic form (click to enlarge): 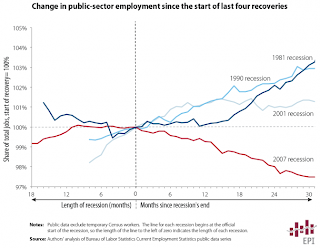 Women have been disproportionately hurt by losses in public sector jobs. These losses are a direct result, in most cases, of right-wing Republican policies. It says something about the utter mendacity of the Romney campaign and the Republicans in general that--


their policies caused the economic collapse


they have gutted public sector jobs


AND THEY BLAME OBAMA!


The Republicans will keep repeating this lie about women's job losses again and again, hoping people are uninformed and hoping to distract them with this lie. It will be our job to nail Willard and his Flying Monkeys every time they trot it out.